Ameon, the building-services-engineering company based in Lancashire, has acquired more office space to accommodate a significant increase in staff numbers and expand its headquarters at Whitehills Business Park next to the M55 near Blackpool. The acquisition of premises next to its headquarters in Olympic Court increases the size of its headquarters by 50%.

The company employs around 50 people in executive, management and administration functions in Blackpool and has around 200 employees in total. Staff numbers have doubled in recent years.

The move to Whitehills Business Park in 2009 signalled the start of major growth to an annual turnover of about £35 million, including the expanding utilities arm.

Ameon managing director, Robin Lawson (pictured left with fellow director Mark Court) comments, ‘Our consistent performance in recent years has necessitated significant recruitment here in Blackpool. To be honest, we have been victims of our own success, because we’ve outgrown our home of a little over six years.

‘Our order book suggested that we would need to recruit additional personnel to manage further growth, so expansion of our headquarters was essential.’

The company is currently working on significant contracts such as Manchester’s First Street and Embankment projects, and the City’s new speedway stadium. Its utilities company has also been appointed to work on Liverpool FC’s development of Anfield stadium. 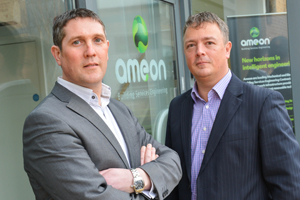